Sometimes the PVS-Studio code analyzer seems to find an issue in the code on which it generates a message, specifies the file name but does not show the number of the line with the issue as shown in the figure. 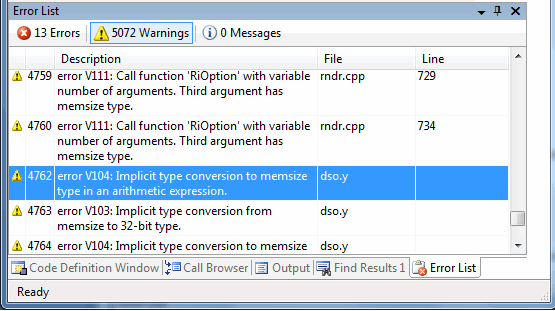 I should note right away that the analyzer does not specify numbers of lines for some errors in the demo version, but now we do not speak about the limitations of the demo-version.

Such a behavior is determined by two specific features:

To understand this case, let's open the Output Window that also contains messages generated by the PVS-Studio analyzer. 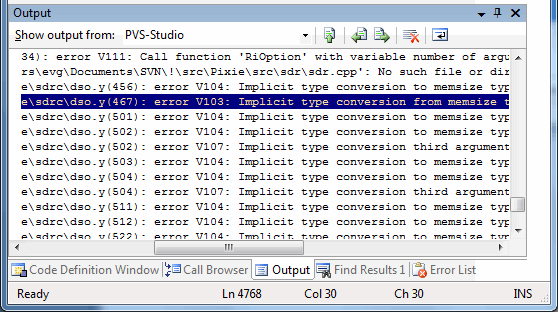 It is written in this window that the problem is in the file dso.y, line 467. But if we look at the project's files, it will appear that either there is no such a file (dso.y) at all in the project or it is situated in some other folder. Well, is this the fault of the PVS-Studio analyzer? Not quite.

Code analyzers, as well as compilers, get information about position in a file relying on special #line directives which are always present in preprocessed files. You can easily find such a directive (in one line) in a common preprocessed file:

Positions of code specified in messages are obtained from this information.

Let's now look at the automatically generated dso.cpp file. You can see the following thing there:

Note that, first, the specified path is not complete and, second, the dso.y file might be absent at all on the computer you check the project on.

So, the absence of a line number in a message generated by the PVS-Studio analyzer means that the file is not found in the specified folder. You should find this file manually and, as well manually, look through the specified code lines.