PVS-Studio now has an operation mode that will help you to find errors and misprints as soon as possible. The analyzer launches right after the files have been compiled and "blushes with shame" for your code if something goes wrong. The feature is currently available only for Visual Studio 2010 users. 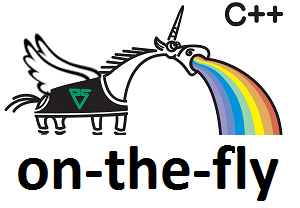 I wrote many times that the sooner an error is detected, the lower is the price of fixing it. Well, I'm certainly not the first one to say it and authors of numerous books and articles have been repeating this over again. Take S. McConnell, for example. So I will not repeat myself.

The previous versions of the PVS-Studio analyzer had to be run manually or during night builds. It is surely fine when you can look through a log at morning and fix some error found. But it's not ideal. It doesn't prevent you from making a couple of small mistakes during the day and spending 10 minutes to find each of them. PVS-Studio will hardly help you in such a case: it's not convenient to run it only for changed files and it's too long to run it for the whole project.

Fortunately, we are programmers ourselves and we are responsive to needs of our keyboard colleagues. A new mode of incremental analysis has appeared in PVS-Studio 4.30. Verification is now almost combined with the compilation step: the analyzer checks those files which are being compiled by pressing the F7 key that everyone loves so much. This mode can be enabled not just simply but very simply: you just have to check the box opposite to the "Incremental Analysis After Build" item in the PVS-Studio menu:

Now let's see how it works by an example. Suppose I enjoyed the process of programming very much and was in a hurry, so I made a mistake in an array's index: 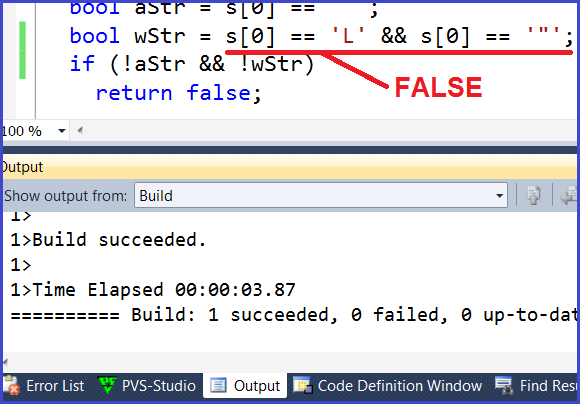 The result of this expression is always 'false'. But I do not take notice of it. I'm writing the code further and feeling happy. Then, satisfied with the work I've done, I press F7 and the modified file compiles successfully and VS2010 does not generate any warnings. I proceed to edit the next code fragment.

But we do have an error. Some time later the analyzer will signal a suspicious code fragment! It will get red and the programmer will but open the necessary tab to see the details:

Indeed, you may read in the message that the condition is always false: 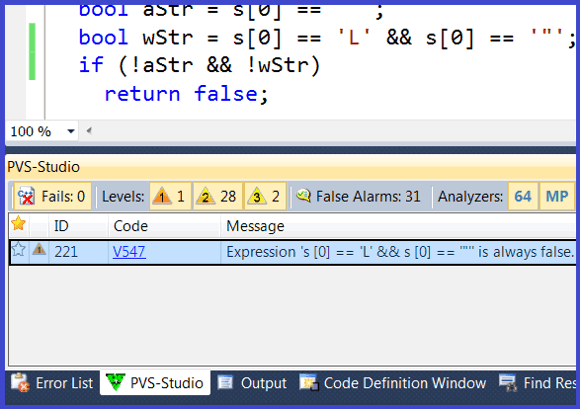 As a result, the error will get fixed almost right after being written.

Please try the new mode of PVS-Studio. As usual, you may download the trial version here. If VS2010 gets a bit slow after installation, reduce its appetite. The analyzer by default uses all the available processor cores. So, you may specify in the settings how many cores can be used.

I'm anticipating some questions right now. That's why I've prepared a small FAQ at the end.

Only Visual Studio 2010 has the API that allows you to determine which files have been modified and what files are dependent on them. In other words, a mechanism has appeared that allows you to choose the files to be checked. You may read about it in detail here [1].

If people like the new mode, we will think over as how to implement it for Visual Studio 2005/2008 users too. However, I want to note that it's much easier to switch to Visual Studio 2010 than it seems. You may select the old compiler but use capabilities of the new environment. This is achieved through Platform Toolset [2].

2) Why not implement check on the fly straight away and underline errors immediately like it is done in IntelliSense?

First, we do not have such a close integration with Visual Studio. To get it, we must be better friends with Microsoft.

Second, it won't do anyway. Static analysis is quite complicated and an analyzer must collect much information on a rather large code fragment to detect some errors. Since the code is being edited, it will be almost impossible to parse it. I think every programmer has seen how a C/C++ compiler goes mad about one unnecessary parenthesis or incorrect template. C/C++ is not the right language to be analyzed absolutely on the fly.

3) What to do if I cannot tell green from red?

A good remark. Well, in the next version there will be also a text written on the tab along with the color change.

4) Why doesn't something work here or there?

This is a new feature and some errors are highly probable. We will appreciate if you tell us about drawbacks you've noticed and your wishes. The Feedback page.

5) When I'm performing Rebuild, will the analyzer check the whole project then?

No. It's meaningless and too long. The analyzer ignores commands of solution and project rebuilds. If you want to check a solution or project, you still may use the corresponding commands in the analyzer.

How to Step Over Legacy and Start Using Static Code Analysis

Legacy code problems are familiar to the majority of software developers. The process of transforming code in legacy is inevitable, ...