Hello, we are the developers of the PVS-Studio static code analyzer. We have created a new software product CppCat and are going to tell you about it in this article. Some time ago we imagined that we had never had PVS-Studio yet retained the experience of developing static analysis tools for C/C++ code. Our minds thus refreshed, we made a new static analyzer just the way we wanted it to be - simple and easy to use. You will also be glad to know that it costs $250 per installation. 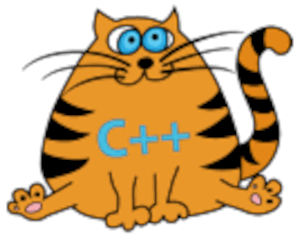 Background of the new product

We always did our best to keep PVS-Studio easy to use and understand. But it inevitably grew to lose its simplicity as it acquired new functionality. For example, such is the ID field in the error table: some find it useful while others are confused by it. People mix it up with the diagnostic number and wonder why there can be IDs like 3, 7, 23, 25 - and what about the rest? The answer is simple and obvious: they are hidden; for example, the "64-bit" diagnostic set is turned off.

Similar issues are with the settings as well. It is important in the case of large projects to have the option of choosing among preprocessors (Clang or Visual C++). It allows a user to greatly enhance the speed of analysis for certain projects. But those who are only getting started with the tool may be confused by this option. They select Clang and expect to get warnings generated by it. Some even send us indignant letters blaming us for selling an expensive add-on for Clang. Just in case, follow this link to find out how exactly we utilize Clang. You know, it's difficult to sell our analyzer to a programmer who mistakenly thinks that it is just a wrapper for Clang :). This is how a vague setting gives rise to great confusion.

We programmers are smart and sensible guys. But when it comes to learning new tools, we often resemble ordinary users. And it's quite okay: there's just too much information around us and you usually don't have enough time and strength to spend on learning every technological innovation. So, although programmers' tools are pretty intricate products, learning them should be as simple as handling a calculator is. Otherwise, you risk your tool just remaining unnoticed. People just won't have enough time to comprehend it. And that's what often happens to PVS-Studio.

It's entirely our own fault that PVS-Studio has grown so complicated. And we have failed to find a way of returning the interface to the simplicity it possessed before. So, we created a new product: CppCat. This tool is so simple and streamlined that you will never get lost among its settings. Learning to use it takes less time than reading this article. Yes, it lacks quite a few features, but those are still there in PVS-Studio that will also remain. We just offer a cheaper carrot grater to those who don't need an expensive multi-function food processor.

Now, let's point out the main idea once again. We've created an easy to learn and use tool for static analysis of C/C++ code. It will make your first steps into the static analysis methodology as simple as possible. And thanks to its simplicity and relatively low price, CppCat should go on to become a popular tool which will be as indespencible to the software developers, as a safety net for the rope-walker!

The CppCat tool is designed to detect suspicious fragments in program code written in C/C++. The main functions of the analyzer are:

That's all. The analyzer does exactly what it is designed for: checking the code and telling the programmer which fragments need closer examination. The tool can only work in Visual Studio (2010, 2012 and 2013).

We decided to drop using the phrase "the analyzer detects bugs" too often. You see, any analyzer produces false positives. But when the analyzer generates warnings on correct code, it doesn't mean that you don't have to do anything with that code at all. We came across an interesting association in one article. The analyzer reveals code fragments with the "smell". "Smelly" code is not necessarily incorrect. It just means that it contains some anomalies that may cause some confusion when the code is maintained by other developers. "Smelly" code may lead to errors after refactoring: a programmer responsible for modifying the code may fail to understand how certain functions work and bring in some defects by a mistake.

Thus, we believe that every code fragment that CppCat finds suspicious must be reviewed and improved. By clearing the code of its "smell", you will greatly help your coworkers. However, warnings do need to be suppressed sometimes. We offer a number of methods to do that - see the CppCat manual.

Readers may still wonder: in what ways exactly is CppCat different from PVS-Studio? Here's the answer in the form of a summary table: 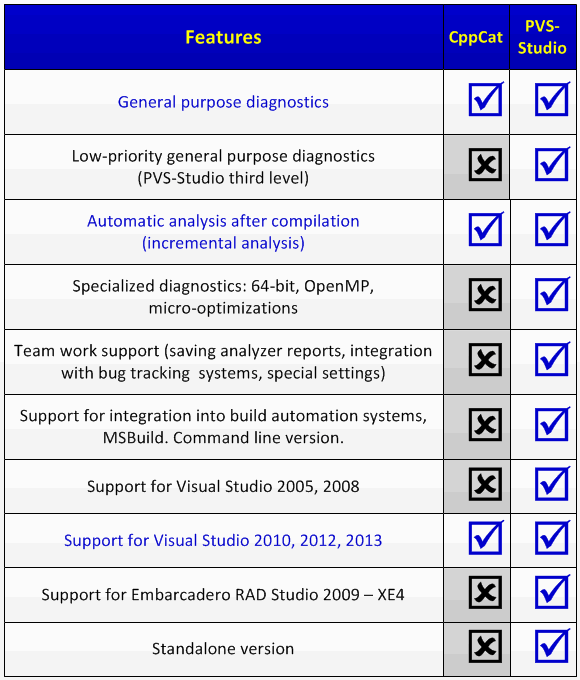 On one hand, CppCat lacks much. But on the other, it retains all the functions necessary for everyday use in your work.

The main ideological difference between CppCat and PVS-Studio is the following:

CppCat licenses are individual. You install it on your computer and start using it. It doesn't provide functionality useful in team work - for example, you cannot set CppCat to run night checks. This and other functions of that kind are provided by PVS-Studio.

PVS-Studio is intended for large, complex projects. CppCat can check large projects too - there's no restriction concerning the project size. It's just that CppCat doesn't have some of the additional functions and ships under a different licensing policy.

It's very simple with the prices. One copy of the product costs $250. The license is not floating - it is bound to one computer (hardware ID).

We offer discounts depending on how many licenses you buy at a time:

Nothing complicated about that too:

The full-function trial version can be used for 7 days.

And what about PVS-Studio?

We go on developing PVS-Studio as well. It is still relevant and all its aspects, as well as the pricing policy, remain the same.

The Development History of PVS-Studio for Linux

Earlier this year, we started doing something that we had felt uncertain about for a long time, namely porting PVS-Studio ...

Ten years ago, we created a simple utility called 'Viva64' intended to detect problems in 64-bit code. This is how ...