Some time ago, a vulnerability was revealed in OpenSSL, and I guess there's no programmer who hasn't been talking about it since then. I knew that PVS-Studio could not catch the bug leading to this particular vulnerability, so I saw no reason for writing about OpenSSL. Besides, quite a lot of articles have been published on the subject recently. However, I received a pile of e-mails, people wanting to know if PVS-Studio could detect that bug. So I had to give in and write this article. 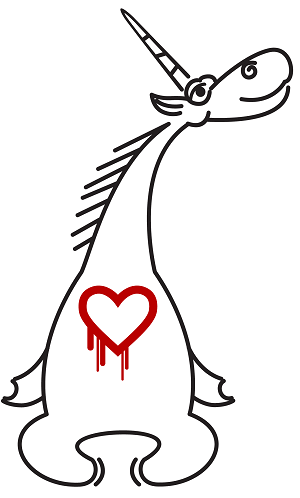 I guess everyone knows by now about a serious vulnerability found in OpenSSL. But in case you have missed the news for some reason and want to find out more on the subject, see the following links:

To put it short, the vulnerability that could be exploited to access users' private data has existed for about 2 years. During all this time, it has been staying unnoticed by all code analyzers, though everyone probably tested the library more than once.

So did we. Here's a post about that check: "A few words about OpenSSL". We found a few bugs in the code, but none were too serious. The authors fixed them after that, so our check had not been in vain.

I haven't investigated if the Heartbleed bug was already there when we were checking OpenSSL. But anyway, I know for sure that PVS-Studio cannot detect such bugs. It's that they are just hard to detect in themselves. The OpenSSL project has been analyzed with many different tools, and none of them ever noticed the bug. For example, Coverity Scan, a leader among code analyzers, failed too. Here's a posts about that: "Heartbleed and Static Analysis", "Heartbleed and static analysis (2)".

The reason is that bugs of this kind are very difficult to diagnose with the means of static analysis: the code is too complicated, and the analyzer needs to take into account the values stored in memory, figure out what is hidden behind explicit type conversions, and so on. Even a human can't easily figure out what the error is about; and static analyzers give up immediately. It's not a flaw of the static analysis methodology though - it's just that the error is really complicated. There's probably no tool that could catch such a bug without preliminary training.

Note that there are also static analysis tools, both popular and unknown, designed specifically for detecting vulnerabilities. Perhaps they could detect the Heartbleed, but I strongly doubt it. If they had, the authors would have made use of the fact for advertisement. Of course, there is also a version that such a tool does exist, developed by some intelligence services who will never tell us anything. But it looks too much like a conspiracy theory, and I think we'd better not go on with it.

My personal opinion is, it is just an error, not a tab (backdoor). Static analysis tools cannot detect it because it is very complicated. That's it.

I could have finished with the article here, but you would have found it too boring then. So I decided to check OpenSSL with PVS-Studio once again. I haven't found anything of interest, but let's have a look at what we've got, anyway.

Why are there so few bugs? Because OpenSSL is a high-quality project. A serious vulnerability caught in it doesn't mean the code is awful. I suspect many projects have much more serious security holes but they are not of much importance to anyone. Besides, the OpenSSL project is regularly checked by various tools.

I repeat it once again: I haven't found any serious bugs. So you'd better treat the text below as comments on untidy code rather than error descriptions. I just don't want you to leave comments blaming me for making a big deal of trifles.

The (ctx->buf_len_save - ctx->buf_off_save > 0) expression works in a different way than it seems at first.

The (ctx->buf_len_save - ctx->buf_off_save > 0) condition will be true whenever the variables are not equal. In other words, the following two expressions are equivalent:

A note for those not well familiar with the C language. Experienced developers may skip the text blow.

Now we compare the unsigned number 4294967286u to zero. Zero is cast to the unsigned type too, but it doesn't matter.

Is it an error? I can't say for sure as I'm not familiar with the project design, but I think it's not.

It's more likely that we are dealing with the following logic. The 'buf_len_save' variable is usually larger than the 'buf_off_save' variable, and only in rare cases may they be equal. And it is for these rare cases that the check was implemented. The case when (buf_len_save < buf_off_save) is probably impossible.

There is a fragment in the code where an uninitialized variable may be used. It won't lead to any bad consequences though. Here is this code:

The 'i' variable may appear uninitialized if (o == false). It will result in adding god knows what to 'j'. But there is nothing to worry about because when (o == false), an error handler is called and the function terminates.

The code is correct but untidy. It's better to check the 'o' variable first and only then use 'i':

At first, the 'ret' variable is assigned value 2, then value -1. I suspect the first assignment is unnecessary and was left in the code by mistake.

Dereferencing a null pointer before checking it is the most common mistake in programs (judging by my experience). It's not always an error as there are many cases when the pointer just can't be null. However, such code is potentially dangerous, especially if the project is rapidly changing.

OpenSSL also has such mistakes:

PVS-Studio's diagnostic message: V595 The 'pub_key' pointer was utilized before it was verified against nullptr. Check lines: 951, 952. e_ubsec.c 951

To notice the error, we need to expand the macros. After that, we'll get the following code:

It is first dereferenced: (pub_key)->dmax.

There are several code fragments where a variable is compared twice to one and the same value. I don't think them to be errors; it's just that the second check was written by mistake and can be removed.

I marked the identical checks with "<<<<====". I mentioned this duplicated check in the previous article, but it is still unfixed, which means it's surely not a defect.

Unnecessary checks No.2, No.3

PVS-Studio's diagnostic message: V501 There are identical sub-expressions 'type' to the left and to the right of the '&&' operator. s3_pkt.c 952

The 'type' variable is checked twice for being non-null.

This code fragment was copied into another file, so that file also includes this comparison: d1_pkt.c 760.

It's not a good idea to use magic constants to specify string lengths because you may easily make a mistake. The PVS-Studio analyzer has found three fragments of this kind in OpenSSL.

To prove that this is an error, let's examine a few examples of the BIO_write function's calls:

As you can see from these examples, the last number specifies the string length.

And here's an incorrect code now:

PVS-Studio's diagnostic message: V666 Consider inspecting third argument of the function 'BIO_write'. It is possible that the value does not correspond with the length of a string which was passed with the second argument. asn1_par.c 378

The length of the "BAD ENUMERATED" string is 11 characters, not 14.

PVS-Studio's diagnostic message: V666 Consider inspecting third argument of the function 'strncmp'. It is possible that the value does not correspond with the length of a string which was passed with the first argument. s_server.c 2703

The length of the "GET /stats " string is 10 characters, not 11. The last space is forgotten. It's a small defect, but it is still a defect.

PVS-Studio's diagnostic message: V666 Consider inspecting third argument of the function 'strncmp'. It is possible that the value does not correspond with the length of a string which was passed with the second argument. asn1_gen.c 371

The problem is in the following line:

The length of the "BITLIST" string is 7 characters.

Let me take a step away from the subject for a while. Some readers may wonder how PVS-Studio diagnoses errors of this kind. Let me explain. The analyzer collects information about function calls (in this particular case - about the calls of the strncmp() function) and draws a data matrix:

The function has a string argument and a numerical one. The string length coincides with the number in most cases, therefore the number is used to specify the string length. But these arguments are different in one call, so the analyzer generates the V666 warning.

Not a good idea

It's not a good idea to use "%08lX" to print a pointer value; it's better to use "%p" designed specifically for this purpose.

It's not a pointer that is passed into the function, but a type value (unsigned long). That's why the compiler and some analyzers will keep silent about that.

PVS-Studio, however, detected this defect in an indirect way. It didn't like the pointer being explicitly cast to unsigned long; doing so is incorrect as nobody can guarantee that the pointer will fit into the 'long' type. For example, you can't do that in Win64.

The fixed, and shorter, code looks as follows:

There are three fragments where a pointer value is printed incorrectly:

Although static analyzers didn't reveal the error we were talking about in the beginning and it has successfully survived in the code for a long time, I still strongly recommend that every programmer use static analysis in their everyday work. Just don't try to find a silver bullet to kill all the problems at one shot and clear your code of every single bug. The best result can only be achieved with a comprehensive approach - combining unit-tests, static and dynamic analysis, regression tests, etc. Static analysis, in particular, will help you find and fix numbers of typos and silly mistakes at the coding stage and thus save time on other useful things like implementing a new functionality or writing more meticulous tests.