This interview was originally published in Russian at megamozg.ru. Republished and translated by the author's permission.

Today we are glad to introduce another "Founder's Advice" article here at "Megamozg". Recently we had a talk with Evgeniy, one of the creators of the PVS-Studio code analyzer and CEO of OOO "Program Verification Systems".

Evgeniy is 30 years old and since 2008 he has been involved, together with his colleague Andrey Karpov, into the development, promotion, and sale of the PVS-Studio static code analyzer. This is a product for programmers designed to detect bugs in the source code of C and C++ programs at the coding stage, prior to testing. 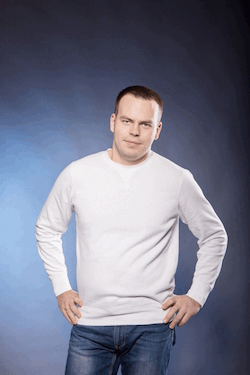 The staff of "Program Verification Systems" is made up of 10 persons today, and the company's office is situated in Tula. Last year, the company sold over 40 PVS-Studio annual licenses, with more than half of them renewed for another year - the figure the developers are proud of.

Who is the target audience of this article?

Articles, blogs, and books we read inevitably affect how we perceive the surrounding world. As a teen, I used to read some articles on "computer" business and would imagine the world the way it was described in those articles. Unfortunately, only years later did I understand that few articles of this kind really have something to do with my everyday reality. I live in a provincial Russian city and although 80% of my customers are from the USA and Europe, articles about life and business in Silicon Valley have very little in common with the world I live in. But then, many years ago, I didn't get it.

Perhaps this text will catch the eye of some young man who is only dreaming of launching his own IT-business. And my hope is that I will manage to get him back to earth so that he sees lesser disappointment and misunderstanding in his future life. Mine still strike me every now and then.

1. Business is no sprint, no long-distance run; it's a marathon (probably not even one)

We all are very excited to read articles about young guys who have just started their own project and get bought by Amazon, Google, or Apple in a couple of months or, at worst, a year, getting paid lots of millions. Inspired by these articles, we start our own project. Gathering all our strength, we lay ourselves out, launch the project, and wait in anxious anticipation. We feel dead sure that Microsoft or Facebook are just about to contact us not later than in a month, if not sooner, offering heaps of shares and cash in return for buying our company (consisting of three to five men). But time runs, and you still don't hear from Microsoft. One year passes, then two, three...

Look, guys, three years is the minimum term your company must make it through to achieve a more or less well-shaped product. Only five years later will it be possible to say for sure that (and if) your clients are willing to pay - and do that on a regular basis. But it's usually not sooner than ten years after the launch that most companies can claim they have found their niche and learned how to make money, having a few unsuccessful releases behind them. You must be ready for this.

There are different opinions on whether you need business partners or should do everything on your own. There are numbers of success stories with more than one character. And there are as many examples with one founder and as happy ending. I don't know which is right. I just know how it was for me. Since we have agreed that business is a marathon, i.e. it takes not less than 5 years to run, we cannot ignore the fact that people tend to change over time. Their mood changes, their life circumstances change, everything changes. It's only in a half-year project that you can hope that things will stay as they are. But running for at least five years, you sure will get tired one day. You sure will get into a depression and feel like giving it all up. And it is at these times that you need a partner. The partner will be able to replace you for a few months, support you both personally and on the business ground. Having a wife is good but you can't put the business on her shoulders for a couple of months while you are going through the blues. On the partner's shoulders, you can.

It is for this reason that I don't preach that "an ideal team of founders must embrace all competences", as custom has it in books. Sure, it's cool when one of you is a techie, another an entrepreneur, and a third guy a designer.

But in our Russian reality, it'll be a huge plus if you manage to find a business partner who understands you and is willing to support you in minutes (and months) of depression, as opposed to having no partner at all. This interview is a good chance to say thank you to my business partner Andrey Karpov. It all would have been just impossible but for him. Thank you, Andrey!

3. Be ready to sacrifice - your personal life, money, or time. Sometimes all of that at once. It is going to pay for itself if things go right

Running business is never easy. Just like magic, it sucks your strength. It demands something in return. I don't know stories when people managed to start a business standing on their head, without sacrificing anything to it. Certainly there must be such cases. And sure there are lots of articles about them. It's just that I have never seen it in my life.

In most cases, business demands hell of time. I mean when you're launching, of course. After that, once you have become successful, you will be spending 300 days a year on vacations and only look into your cell phone every now and then to check another bunch of sales notifications. I say "every now and then" because you will have automatic sales notification turned off, for there will be just too many of those. But as long as you are not at that point, you will be spending plenty of time trying to figure out how to do business, what your clients need, how to get along with your coworkers. Almost everyone sacrifices their time - in the beginning at least.

Many also sacrifice their private life. From this viewpoint, doing business is not that tough for young people or students. When you don't have a family, you don't have to constantly think how to feed it and how much time to spend with it. But these are just obvious trivialities.

Often you have to sacrifice your money too. All those years your business will take to get into the phase when it is starting to at least pay for itself, you must be "feeding" it.

Imagine you're a 4-6 year student working as a programmer for a few years already. Since programmers are nowadays very much asked for as never before, you have managed to save enough money during this time to buy a decent car without loan. Would you agree to reject the car? Would you spend all of that money on your "own project" that would fail with the probability of 99%? If your answer is yes, then you can try playing the game called "own business".

I am convinced that one has to earn one's start-up budget - if only because nowadays you can still make it into the last car just in time while starting an IT-business doesn't require substantial financial resources yet. But things will be different in 10-20 years.

There is, however, an even more grave reason to earn your start-up budget: There is simply no other way to get it. If you are lucky enough to have rich relatives or friends, I do envy you. Most people, however, aren't that lucky.

And now a crazy idea strikes you - what if you go find a few sponsors and ask them! There are so many articles on the Net about people investing money into a mere business idea.

Don't waste your time and other people's time. No one is going to give you money. If you haven't invested into your project yet, why should anyone else do that? Only after you have invested something (considerable, I mean) into it, you can try looking for other sponsors. But never fully rely on that, it's still best to earn your start-up budget on your own.

Do an estimate (with proper allowance!) of how much money you need to launch your business. 100 000? 500 000? Perhaps even 1 000 000? Go and earn it! First, you will learn to appreciate money and spend it wise. Second, it will bring you more confidence. Third, no one will give it to you anyway. Only when you have at least 40 years of your life and a few successful projects behind you, will you have the right to say, "My time costs quite a lot and I can't spend it on making the first steps, so let's find someone else to invest into me". But now it is too early for that.

But how to earn that sum? You need to be working on your project, don't you!? The math is simple. A work week includes 40 hours. There are total 168 hours in one regular week. So you just work 40 hours at your main job "for a boss" and then another 40 hours "for yourself". You'll even have time for sleep.

PVS-Studio static analyzer is known in the C, C++, and C# worlds as a tool for detecting errors and potential ...

Normally we don't write notes about a release of the new version of PVS-Studio. However, this new release included many ...

We are Closing Down the CppCat Project

One odd year ago, we decided to carry out an experiment, and release a tool for small teams and single ...