Recently the world got to know that Digital Video, the makers of TOONZ, and DWANGO, a Japanese publisher, have signed an agreement for the acquisition by Dwango of Toonz, an animation software which was independently developed by Digital Video (Rome, Italy). 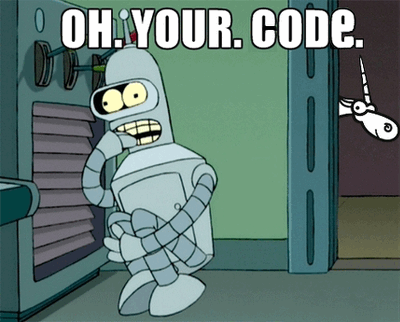 Digital Video and Dwango agreed to close the deal under the condition Dwango will publish, and develop, an Open Source platform based on Toonz (OpenToonz). It will include features developed by Studio Ghibli (*Toonz Ghibli Edition) which has been a long time Toonz user. "Howl's Moving Castle", "Spirited Away", "Ponyo on the Cliff by the Sea" and many other fantasy films - are among the most known fantasy films. One more cartoon of their production "Futurama" inspired our team to write this article about the source code of OpenToonz.

OpenToonz is a software for producing a 2D animation. It is based on the "Toonz" project, which was developed by Digital Video in Italy. Later it was customized by Studio Ghibli, and has now been used for creating its works for many years already. Besides the animation films, this project was also used for creation of computer games - Discworld, and Claw, for instance.

It should be noted that the price of the kit was about $10000, but the code quality leaves much to be desired. This project is a treasure trove for a static analyzer. The size of OpenToonz source code is about 1/10 of FreeBSD kernel, where we've found more than 40 serious bugs with the help of PVS-Studio, but here we have found much more!

OpenToonz was checked in Visual Studio 2013 using PVS-Studio, version 6.03, which supports C/C++/C#, different build systems, and is still being actively developed. The compilation stage already aroused a lot of suspicion when I saw the number of compiler warnings - by the end of the build there were 1211 of them! It shows that the code wasn't really cared for! Moreover, some of the compiler warnings were disabled by #pragma warning, and even there were several bugs there, that I will speak about later. This article will be a little atypical - we are presenting bugs found in the project, which are usually common for novice programmers who have just started learning C/C++. I will start the description with analyzer warnings which are connected with incorrect usage of memory and pointers. 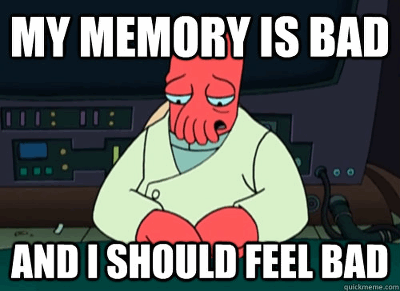 The analyzer detected that dynamic memory is allocated and freed in incompatible ways. After the call of new[] operator the memory must be freed with the delete[] operator. Note that square brackets are used here. I want to draw your attention to this for a reason - have a look at the following example:

V611 The memory was allocated using 'new T[]' operator but was released using the 'delete' operator. Consider inspecting this code. It's probably better to use 'delete [] uPrime;'. tstroke.cpp 3353

In C++ operators new/delete and new[]/delete[] are used in pairs. The use of different operators for allocation and deallocation of dynamic memory is an error. In the code given above, the memory that is allocated for the uPrime array won't be correctly freed.

Unfortunately, this fragment is not the only one. I have noted down 20 more fragments in the file OpenToonz_V611.txt.

V554 Incorrect use of auto_ptr. The memory allocated with 'new []' will be cleaned using 'delete'. screensavermaker.cpp 29

Here we have an alternative variant of the bug we have just seen, but here the operator delete is "hidden" inside of the pointer std::auto_ptr. This also leads to undefined behavior.

To correct this, you must specify that delete[] must be used here.

V599 The destructor was not declared as a virtual one, although the 'TTileSet' class contains virtual functions. cellselection.cpp 891

Now let's talk about memory leaks and partial destruction of objects. In this example the objects, inherited from the TTileSet class will not be completely destroyed.

Description of the class TTileSet:

The class is abstract and contains pure virtual functions. You cannot create objects of this class as it is only used by derived classes. Thus, due to the missing virtual destructor in TTileSet (there is a destructor, but it isn't marked as a virtual one), all derived classes will fail to be completely cleaned.

In the OpenToonz code I found several classes that are inherited from TTileSet:

Each of these object classes (or those derived from them), will not be destroyed completely. The probable outcome, is undefined behavior; in practice, this is likely to lead to memory leaks, and other resource leaks.

Developers should review the following fragments too:

Dangerous use of pointers 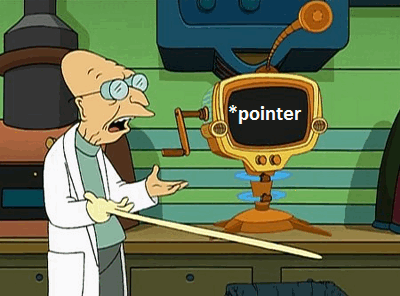 V503 This is a nonsensical comparison: pointer < 0. styleselection.cpp 104

The getStylePage() function returns a pointer to some page: TPalette::Page*. Such a comparison with 0 doesn't make sense. I have researched the way the function getStylePage() is used, and saw that in all other cases the result of this function is verified against null, but here the programmer made a mistake.

Most likely, the programmer put operators'&&' and '||' in the incorrect places. Otherwise, if the pointer region is null, it will be dereferenced.

The Analyzer detected potential use of an uninitialized pointer socket. If the variable m_tcpServer is false, the pointer will not be initialized. But, being uninitialized, it can still be passed to the connect() function.

There are a lot of fragments where we may potentially have null pointer dereference. Usually there is a necessary check, but one or more fragments are still unsafe. For example, there is a check batchesTask, but the pointer was already dereferenced before the check.

29 similar fragments are shown here, in the file: OpenToonz_V595.txt

Errors related to working with strings 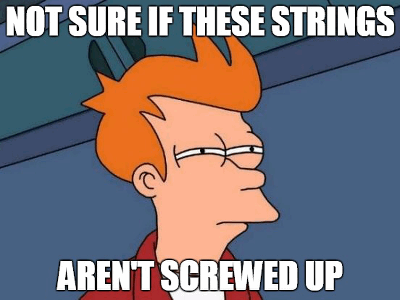 V530 The return value of function 'toUpper' is required to be utilized. sceneviewerevents.cpp 847

ToUpper() method does not change the string 'text'. In the documentation it is described as: QString QString::toUpper(), i.e. it is a constant method.

In the code there are three functions, whose return value is not used. All of these fragments need to be edited:

The uninitialized iterator it1 is used in the string operations. Most likely, the programmer forgot to replace it with ft iterator.

V642 Saving the '_wcsicmp' function result inside the 'char' type variable is inappropriate. The significant bits could be lost, breaking the program's logic. tfilepath.cpp 328

Here is what this code is equal to:

V655 The strings were concatenated, but are not utilized. Consider inspecting the 'alias + "]"' expression. plasticdeformerfx.cpp 150

The analyzer detected an expression whose result is not used. Most likely, '+' operator was accidentally written instead of '+='. As a result, a square bracket isn't added to the alias string, as the programmer planned. 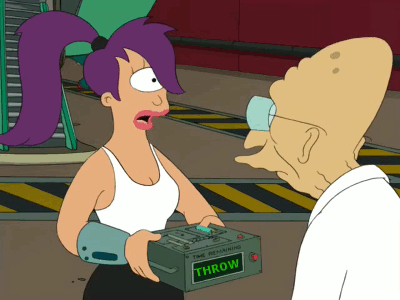 V596 The object was created but it is not being used. The 'throw' keyword could be missing: throw domain_error(FOO); pluginhost.cpp 1486

The keyword throw was accidentally forgotten in the function. As a result, this code does not generate an exception in case of an error situation. Correct code variant:

V746 Type slicing. An exception should be caught by reference rather than by value. iocommand.cpp 1620

The analyzer detected a potential error, related to catching the exception by value. This means that a new se object of TSystemException will be constructed with the help of a copy constructor. At the same time, the code will lose some information about the exception that was stored in the classes, inherited from TSystemException. 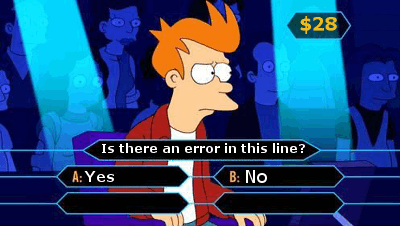 An interesting bug. Perhaps the programmer wanted to check if the size() value is even or odd. That's why the remainder of division by 2 must be compared with zero.

In this code snippet, the programmer made a mistake related to the priority of the ternary operator ':?' . Its priority is lower than that of the addition operator. Consequently, if the condition (re < gr) is false, the following evaluations will be done incorrectly: real variables will be added to logical ones.

Never use several ternary operators at once - it's the easiest way to make an error.

The condition marked by an arrow does not depend on the result of the subexpression "state == Z_DATA_ERROR". This is easy to check, if you build a truth table of the whole conditional expression. 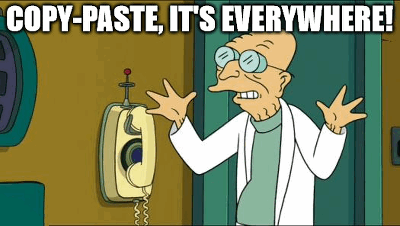 We see that newLeftNode and newRightNode variables are confused in the conditions. As a result of this error, the else branch is never executed. Most probably, one of the conditions should be as follows: if (newRightNode-> m_concave).

V501 There are identical sub-expressions to the left and to the right of the '||' operator: m_cutLx || m_cutLx canvassizepopup.cpp 271

There are two logical variables in the code: m_cutLx and m_cutLy that differ just in one letter. But in the example given we see that only m_cutLx gets used. Perhaps, there is a typo in one of them.

V501 There are identical sub-expressions 'parentTask->m_status == Aborted' to the left and to the right of the '||' operator. tfarmcontroller.cpp 1857

The analyzer detected two similar comparisons with the constant Aborted. Having done a search in the file, I found a similar code block in line 2028 with this condition:

Perhaps, the condition should be similar in this fragment.

V501 There are identical sub-expressions 'cornerCoords.y > upperBound' to the left and to the right of the '||' operator. tellipticbrush.cpp 1020

Here the programmer made a small typo, using y instead of x.

I won't describe six more typos caused by copy-paste programming, I will just give them as a list. These fragments should also be definitely reviewed by the developers: 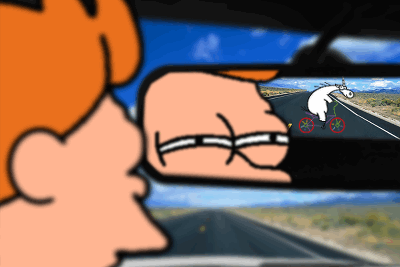 Here is how the compiler disables the warnings that were finally noticed in this project. The error is that the #pragma warning(default : X) doesn't turn on the warning, but sets it as a DEFAULT one, which can be different from what the programmer expects. The correct variant of the code should be:

V546 Member of a class is initialized by itself: 'm_subId(m_subId)'. tfarmcontroller.cpp 572

An interesting bug in the list of class initialization. The field m_subld is initialized by itself; perhaps the programmer wanted to write m_subId(subId).

V557 Array overrun is possible. The '9' index is pointing beyond array bound. tconvolve.cpp 123

It's a large code fragment, where a programmer accesses a val array, consisting of 9 elements, by the index from 1 to 9. Although, there is a loop where we see correct access of the array by the index from 0 to 8.

The analyzer detected the comparison of enum values which have different types. Using code search I also found that the field of m_action class is initialized with a correct type, but in this fragment it is compared with a constant of a different type. 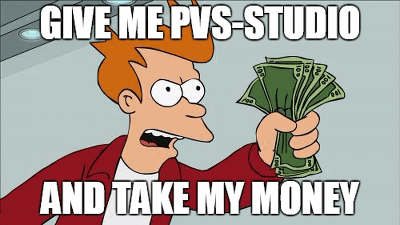 As was already mentioned, OpenToonz project is a great find for a static code analyzer: even being quite small, it has a great number of serious bugs. Not all bugs are listed in this article; moreover, we weren't able to fit some serious warnings because of their big number. We will notify the developers about the bugs found, perhaps they will be interested in improving their code.

Pixar company also expressed their intention to open the source code of Universal Scene Description (USD). We are looking forward to this.

For those who may be interested: you may find PVS-Studio here, and run it on your C/C++/C# projects. The analyzer works in the Windows environment, and supports various build systems.