This is another piece in our series of articles where we talk about the importance of high-quality code in computer systems whose failure can cause huge expenses or casualties. This time we will talk about reliability of embedded software in military equipment. 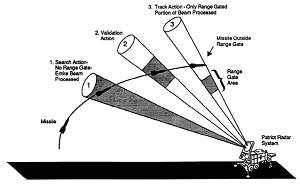 February 11, 1991, the Israeli forces inform the Patriot Project Office about a defect found in the Patriot surface-to-air missile defense system. They discovered that running the system for consecutive 8 hours resulted in a 20% targeting precision loss, and estimated that after continuous operation for 20 hours the inaccuracy would grow so big that the Patriot would no longer be able to lock on, track, and intercept ballistic missiles. The U.S. commanders underrated the importance of the discovery, presuming that the system would never be used for over 8 hours as it had been designed as a mobile system to be used for short-time defense operations.

February 16, a bug fix is issued, but applying it to every unit requires some time due to the ongoing war.

February 25, a ballistic missile R-17 (also known as Scud) strikes a U.S. Army barracks in Dhahran, Saudi Arabia, killing 28 and injuring 96 soldiers. The Patriot battery failed to intercept the missile due to a software error.

February 26, the bug fix is delivered to Dhahran. 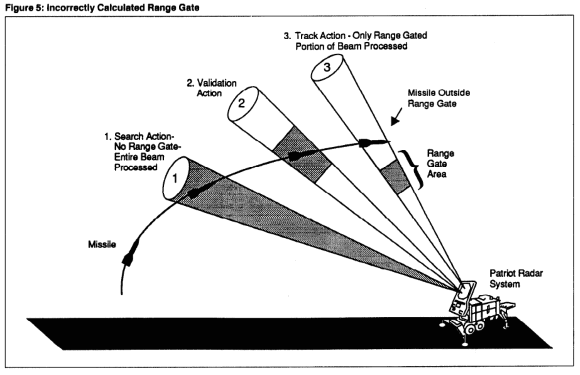 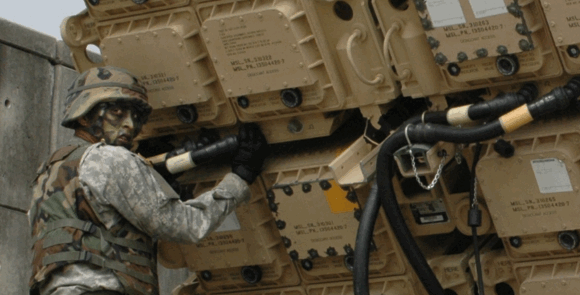 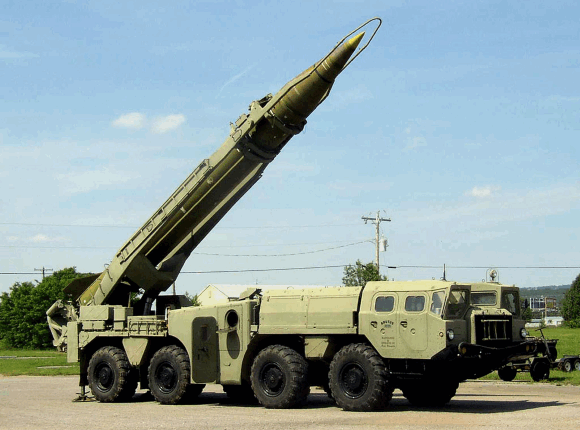 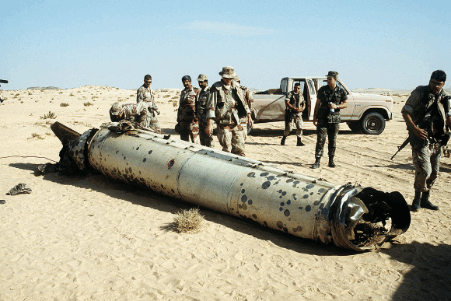 The MIM-104 Patriot is a U.S. surface-to-air missile (SAM) defense system used by the USA and several allied nations. 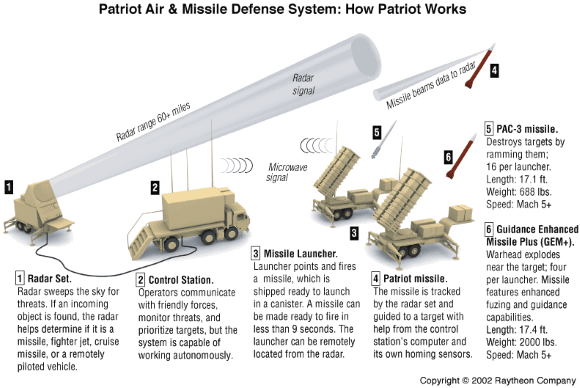 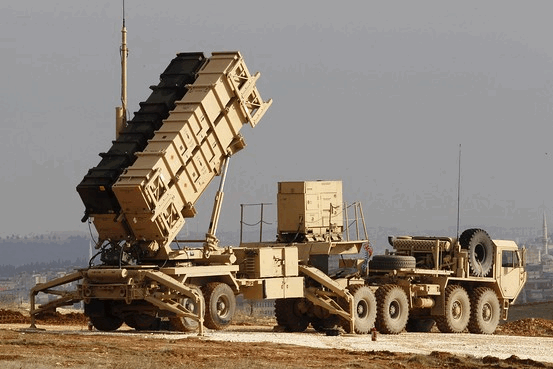 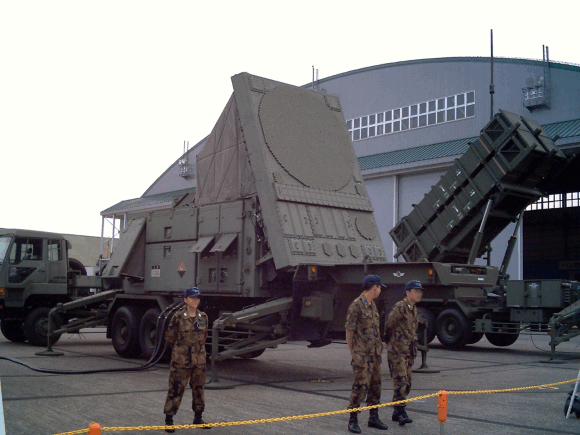 A detailed view of an AN/MPQ-53 radar set. The circular pattern on the front of the vertical component is the system's main phased array, consisting of over 5,000 individual elements, each about 39 millimeters (1.535 in) diameter. 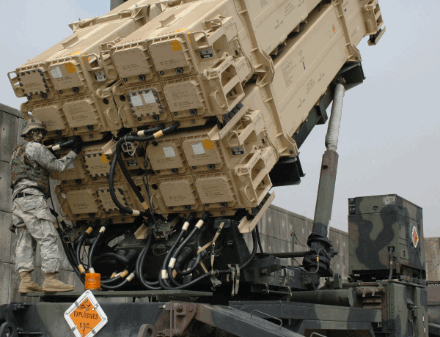 An investigation discovered a bug in the Patriot's tracking software that caused the system's internal clock to drift gradually from the real time.

The time was stored as an integer number in a 24-bit register with an accuracy of 1/10 of a second. This resulted in some portion of the time value being lost as it incremented each 0.1 seconds. To calculate a target's location, the data had to be cast to real numbers [source].

An R-17's velocity is 1676 m/s, so it covers over half a kilometer in 0.34 seconds, which is more than enough for the missile to slip past the Patriot's intercept range. The funny thing is that this time-calculation bug was fixed only in some parts of the software, but not in all of it.

The software had been written in an assembler language 15-20 years earlier and was modified a number of times by different programmer teams during the subsequent years.

The slides shown below are taken from the report on the Patriot system's failure: 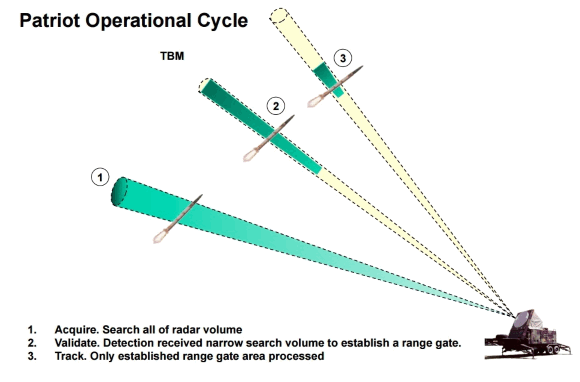 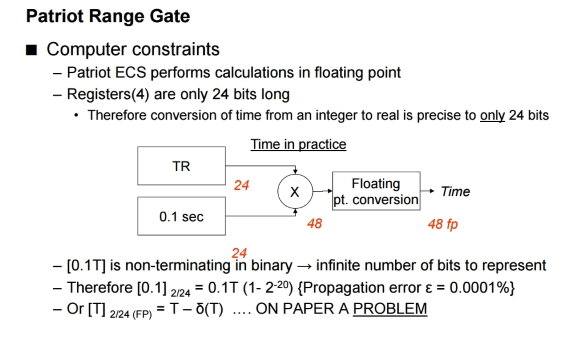 Our goal is to attract the community's attention to the issues of software reliability. The times when computer programs were all about some strange, obscure scientific calculations in Fortran or video games are long over. Now they surround us and permeate every area of our activity.

In earlier times, critical software bugs affected narrow, specific areas, for example civil (Ariane 5) and military rocket industry. Nowadays, you may encounter them not only when working on your computer, but also when driving a car (Toyota) or undergoing medical treatment (Therac-25). We are among those who support programmers in their fight against bugs. Static code analyzer PVS-Studio developed by our team helps detect many of the errors in C, C++, and C# programs as early as at the coding stage. Taking this opportunity, I'd also like to remind you that starting with October 25, 2016, there is a Linux version of PVS-Studio available in addition to the existing Windows version.

This article was originally published (in Russian) on habrahabr.ru. The original and translated versions were posted on our blog with the permission of the author.

A User's Experience of Working with the Analyzer

Analysis based on pre-generated preprocessed files is no longer supported. Please consider using the Compiler Monitoring mode instead. This mode allows a generation and analysis of preprocessed files automatically during regular build process.