Ardour is so far the largest of musical projects involved in the review of code defects. The project includes about 1000 files of source code in C++. The project is actively maintained by the community of developers, but at the same time I did not find mentions of any applied static analysis tools. As a result, there are many different types of errors. The article will describe the most interesting ones. 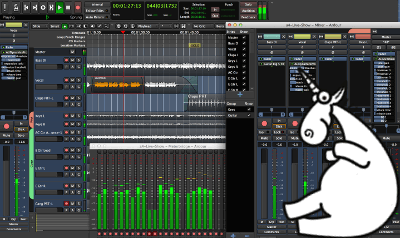 Ardour is a Digital Audio Workstation. It runs on Linux, Mac OS X and FreeBSD. Ardor's functionality is limited only by the equipment, on which it is running. This makes the program one of the most popular tools for working with sound in professional environment.

Ardour uses many third-party libraries. Some of them are located with the Ardour source code and are edited by its authors. The project is divided into different components. The article includes only the most interesting errors from the directories gtk2_ardour and libs/ardour. To view the full report, authors can independently check the project, having sent a request for a temporary key to our support.

Analysis was performed using PVS-Studio. PVS-Studio is a tool for bug detection in the source code of programs, written in C, C++, and C#. It works in Windows and Linux environment.

What Is the Author's Idea?

In this section I will give some code examples in which the readers' opinions might divide if it is an error or a false positive. The right solution is to rewrite the code anyway, so that it would not confuse other developers and analysis tools.

A do-while(false) loop can be used jointly by the continue operator to go to the end of the block (goto analog), but why is the break operator here? Perhaps, a mistake was made in the code and the loop must be do-while(true). So, the code can and should be rewritten.

The function fgets() takes the maximum string length, including terminal null as the second argument, i.e. the buf buffer will null-fail correctly. What happens next in the code? The (strlen (buf) < MAX_STRING_LEN) condition is always true, because the function fgets() reads no more than (MAX_STRING_LEN-1) characters. Further, if the string is not empty, then the last character is removed from it. I'm not sure that this is what a developer was planning to write. Most likely, he expected that the line has not been limited by the null character, but in this case, this line cannot be passed to the strlen() function. In general, code should be rewritten, so that you don't have to guess how it works and whether it complies with the originally intended idea.

Please, pay attention to all calls to the function substr(). The second argument passes the value -1. But what does it mean? The function prototype looks as follows:

According to the documentation, without the 2nd argument function substr() returns the substring from the specified position to the end of the line. So, instead of simply writing substr(pos) or at least substr (pos, string::NPOs), a developer has decided to pass the value -1, which ultimately is implicitly converted to the type size_t and turns into the value string::npos. Probably, the code is correct but it doesn't look nice. So, it can and should be rewritten.

Something is Wrong in the Program

Because of the same conditional expressions, the function update_track_number_visibility() is never called. It looks like the track number is not updated correctly at the right moment.

V571 Recurring check. The 'if (working_on_selection)' condition was already verified in line 284. editor_ops.cc 314

A boolean variable working_on_selection is checked the second time, so that the condition will always be false. Perhaps, due to an error, some UI element is selected incorrectly.

V512 A call of the 'memset' function will lead to underflow of the buffer 'error_buffer'. ardour_http.cc 142

I often came across errors when developers, for instance, pass to function memset() not the size of the object, but the size of the pointer on it. Here I found something new. Instead of a whole array they would nullify only one byte.

V541 It is dangerous to print the 'buf' string into itself. luawindow.cc 490

A string is formed in the buffer. Then a developer wants to get a new string, having saved the previous string value, and having added the value of the function random() to it. It seems really simple.

There is the original comment in code, left by a developer, who doubted in code correctness. To explain why an unexpected result may be received here, I will quote a simple and clear example from the documentation for this diagnostic:

As a result we would like to receive a string:

But in practice, we will have such a string in the buffer:

In other situations, the same code can lead not only to the incorrect text, but also to the program abortion. The code can be fixed if you use a new buffer to store the result. The correct version:

In case of the "%s%ld" control string, the problem might not occur and the correct string will be generated. But the code is very dangerous and insecure.

V530 The return value of function 'unique' is required to be utilized. audio_library.cc 162

A removal of duplicated elements from a members vector was written incorrectly. After calling the function unique() the undefined elements remain in vector.

Correct variant of the code:

The above code assumes 8 attempts of some operation but the counter variable tries does not change in the loop. Therefore, there is only one exit point from the loop and, judging by the comment, it testifies of a successful performance. Due to this defect in code, a hiding of potential errors occurs in the program and possible lockups are possible when running.

This place feels like a serious error. If the field _session is null, a dereferencing of invalid pointer will happen before the appropriate verification.

In this example, it was not immediately clear why the structure req was not initialized. But having looked at the source code and documentation, I found a function prototype:

The structure is passed by const reference and cannot be modified.

V746 Object slicing. An exception should be caught by reference rather than by value. ardour_ui.cc 3806

The analyzer detected a potential error, related to catching the exception by value. It means that a new e object of SessionException type will be constructed using a copy constructor. At the same time, some information about the exception that was stored in the classes, inherited from TSystemException will be lost. It is more correct and, in addition, more effective to catch an exception by reference.

Other warnings of this type:

V762 It is possible a virtual function was overridden incorrectly. See second argument of function 'set_mouse_mode' in derived class 'Editor' and base class 'PublicEditor'. editor.h 184

At once two functions in the class Editor have been overridden incorrectly. One does not simply change the default argument value :).

V773 The function was exited without releasing the 'mootcher' pointer. A memory leak is possible. sfdb_ui.cc 1064

The pointer mootcher is released under one condition. In other cases, a memory leak occurs.

One of the new diagnostics of PVS-Studio has found an interesting bug. Assigning one object of the class XMLProcessorSelection to another, causes the situation when the pointer inside these objects refers to the same memory area.

Definition of the class XMLProcessorSelection:

As we can see, the class contains a node pointer, but it does not have the overridden assignment operator. Most likely, instead of assignment, set() or add() functions had to be used.

Where Else Can You Search for Errors?

Articles always include a limited number of examples of errors. Also, in this review I took the examples only from the directories gtk2_ardour and libs/ardour. Nevertheless, ther are a lot of sources in Ardore project, and when examining all analysis results you can greatly improve both the project code quality and the stability of the program work.

I would like to give an example of an interesting error from the directory libs/vamp-plugins:

V523 The 'then' statement is equivalent to the 'else' statement. Transcription.cpp 1827

The analyzer has detected the similar branches of a conditional operator. The fact that a check is performed in the condition, regardless whether the item is positive or not, makes this fragment of code even more suspicious.

The Ardour project is probably more popular in professional environment than the previous projects of the review. Therefore, there might be many people interested in its bugs fixing.

If you know an interesting soft to work with music and want to see it in review, then send me the names of the programs by mail.

It is very easy to try PVS-Studio analyzer on your project, just go to the download page.