We're almost three months into 2018, which means the time has come (albeit with some delay) to make a top-10 list of bugs found by the PVS-Studio analyzer in C++ projects over the last year. Here we go! 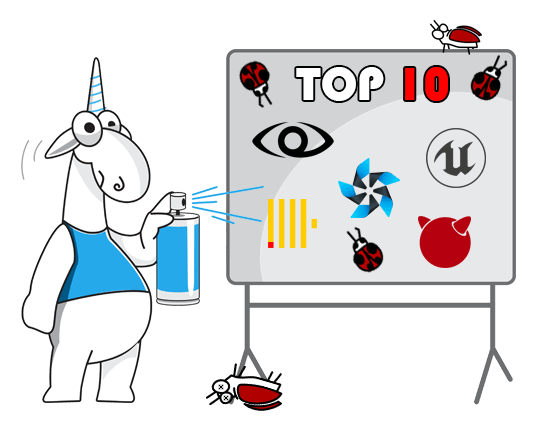 Note. To make it more entertaining, try to find the bugs in the code fragments that follow on your own first and only then go on reading the warning and my comments. I guess you'll enjoy it more that way.

The error was found in one of the most popular text editors, Notepad++.

The analyzer didn't like the (lParam >> 16) && 0xff expression. The second argument passed to the ToAscii function will always evaluate to 0 or 1, which will depend solely on the left subexpression, (lParam >> 16). It's obvious that the & operator should be used in place of &&.

Source: Give my Best Regards to Yandex Developers

This error was found in the ClickHouse project developed by Yandex.

This code is an example of incorrect handling of an error that requires throwing an exception. Note the check of the cond_col pointer in the if statement. If control reaches the else branch, where the exception is to be thrown, the cond_col pointer will definitely be null, yet it will be dereferenced in the cond_col->getName() expression when forming the error message text.

This is one of the bugs that we discovered in the MySQL project when comparing the code quality of Firebird, MySQL, and PostgreSQL.

Here's the code fragment with the error:

PVS-Studio warning: V596 The object was created but it is not being used. The 'throw' keyword could be missing: throw runtime_error(FOO); mysqlxtest.cc 509

If there is no active connection (!active_connection), an exception object of type std::runtime_error will be created and... that's all. Once created, it will simply be deleted and the method will run on. The programmer obviously forgot to add the throw keyword for the exception to be thrown.

Source: How to find 56 potential vulnerabilities in FreeBSD code in one evening

How to find 56 potential vulnerabilities in one evening? Using static analysis, of course!

Here's one of the defects caught in the code of FreeBSD:

PVS-Studio warning: V597 The compiler could delete the 'memset' function call, which is used to flush 'dout' object. The memset_s() function should be used to erase the private data. mlx5_qp.c 159

Note the memset(&dout, 0, sizeof(dout)) expression. The programmer wanted to erase the data in the memory block allocated for dout by filling that block with zeroes. This technique is typically used when you need to erase some private data to prevent it from "lingering" in the memory.

However, dout is not used anywhere after that (sizeof(dout) doesn't count), allowing the compiler to delete this call to memset since such an optimization won't affect the program's behavior from the viewpoint of C/C++. As a result, the data intended to be erased may still be there.

Here's some more reading on the subject:

CryEngine V, the first game engine on this top-list.

If I hadn't cited this code fragment as I did - abridged and isolated from the rest of the code - would you have noticed the error as easily - that suspicious ';' after the for loop pointed out by the analyzer? Note how the code formatting (the indentation before the next expression) also suggests that the ';' character is unnecessary and that the pmd0->next = pmd; expression is meant to be the loop body. But, according to the logic of the loop 'for', in this place a wrong code formatting takes place, which confuses, not a logical error. By the way, in the CryEngine the code formatting was corrected.

Source: Static analysis as part of the development process in Unreal Engine

This defect was found while fixing the bugs detected earlier by PVS-Studio in the code of the Unreal Engine game engine.

PVS-Studio warning: V767 Suspicious access to element of 'SelectedObjects' array by a constant index inside a loop. skeletonnotifydetails.cpp 38

The programmer intended the loop to iterate through all the elements to find the first element of type UEditorSkeletonNotifyObj but made an unfortunate typo using the constant index 0 instead of the loop counter i in the SelectedObjects[0].Get() expression. This will make the loop check only the first element.

This error was discovered when checking the Tizen operating system along with the third-party components used by it. The article is a lengthy one; it contains a lot of nice examples of bugs, so I do recommend checking it out.

But let's get back to this particular case:

The error hides in the body[new_len] = '\0' expression. Note that the body parameter is of type char**, so the result of the body[new_len] expression is of type char*. But the developer made a mistake, forgetting to dereference the pointer one more time, and attempted to write to the pointer the value '\0' (which will be interpreted as a null pointer).

This leads us to these two problems:

Source: How Can PVS-Studio Help in the Detection of Vulnerabilities?

We have reached the top three leaders. The code snippet shown below attracted our attention while we were looking for the answer to the question, "How good is PVS-Studio at searching CVE's?" (check the article above for the answer). The code is taken from the illumos-gate project.

The strchr function returns a pointer to the first occurrence of the character specified by the second argument in the string specified by the first argument. If no such character is found, strchr will return NULL. The programmer, however, doesn't take this possibility into account and adds the value 1 to whatever value is returned. As a result, the ptr pointer will always be non-null, which means any further ptr != NULL checks won't actually be able to determine if it's valid. Under certain circumstances, this will eventually end up with a kernel panic.

This error was classified as CVE-2014-9491: The devzvol_readdir function in illumos does not check the return value of a strchr call, which allows remote attackers to cause a denial of service (NULL pointer dereference and panic) via unspecified vectors.

Although this CVE was originally discovered in 2014, we discovered it during our own research in 2017, and that's why it's here on this top-list.

Source: Static analysis as part of the development process in Unreal Engine

The bug that placed second was found in... yes, Unreal Engine again. I like it too much to leave it out.

Note. I actually considered including a couple more examples from the article about Unreal Engine, but there would be too many bugs from one project then, which I didn't want. So, I do recommend that you check out the article above for yourself, particularly the warnings V714 and V709.

This example is a lengthy one, but you need all this code to figure out what the problem is about.

After that, they are compared in the expression within the return statement. Therefore, the CreateProjectSet method must initialize the last two arguments.

Now let's look at the CreateProjectSet method, which is where the mistakes were made.

The programmer forgot to declare the OutCreatedProjects and OutMatchedProjects parameters as references, which results in simply copying the values of their respective arguments. As a result, the RunTest method shown earlier returns true all the time since all the variables being compared store the same value assigned at initialization - 0.

This is the correct version:

Once I saw this bug, I had no doubt regarding the leader of this top. Well, see for yourself. Please, don't read on until you find the error in the code below yourself. By the way, StarEngine is a game engine too.

You must have wondered, "printf? Why does the analyzer mention printf when there's only the call to sprint?"

That's it! sprintf is a macro expanding into (!) std::printf!

As a result, the uninitialized buffer buf is used as a format string. That's cool, isn't it? I believe this error deserves the first place.

The link to the header file with a macro declaration.

I hope you liked the bugs on this list. Personally, I found them pretty interesting. You may have a different opinion, of course, so feel free to draw up your own "Top 10..." list based on the articles on our blog or the list of defects found by PVS-Studio in open-source projects. 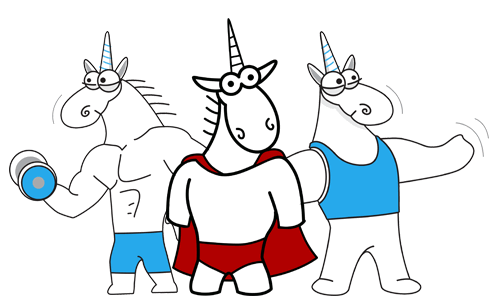 As a reminder, all the defects mentioned here (as well as many others) were found by the PVS-Studio analyzer, which I recommend trying with your own projects as well - download here.

Another year is drawing to an end, and it's a perfect time to make yourself a cup of coffee and ...

2019 is drawing to an end, and the PVS-Studio team is looking back at the accomplishments of this year. In ...

PVS-Studio is a tool for detecting bugs and potential vulnerabilities in the source code of programs written in C, C++, ...