Perl 5 was chosen to expand the list of open source programming languages that have been tested using the PVS-Studio static code analyzer. This article is about found errors and difficulties when viewing analysis results. The number of macros in the code is so great that it seems that the code is written not in the C programming language, but in its peculiar dialect. In spite of the difficulties when viewing code, it was possible to collect interesting problems that will be demonstrated in this article.

Perl is a family of two high-level, general-purpose, interpreted, dynamic programming languages. Development of Perl 5 started in 1994. After a couple of decades, the code in the C programming language with many macros makes today's developers feel nervous.

Perl 5 source code was taken from the official repository (branch blead). To check the project, the PVS-Studio static code analyzer was used. The analysis was performed on the Linux operating system, but the analyzer is also available on Windows and macOS.

Viewing the analysis results was not a simple task. The fact of the matter is that the analyzer checks the preprocessed .i files, in which all preprocessor directives are already expanded, and issues warnings for source code files. This is correct behavior of the analyzer, you do not need to change anything, but many warnings are issued on macros! And unreadable code lies behind macros.

The ternary operator is working not the way you think

Let's start an overview with a nice error. Every few code reviews I have to repeat that the ternary operator has almost the lowest priority in calculations.

Let's look at the following code fragment with an error:

Order of operations that a programmer expects:

What is happening in reality:

Here is a chart with operations priorities: "Operation priorities in C/C++".

Code with a similar error. Nevertheless, if you do not know the priorities of operations, you can make a mistake in the expression of any size.

Another place with an assert:

And here is a warning for the macro... To understand what is happening, even macro implementation will not help, because it also uses several macros!

Therefore I cite a fragment of the preprocessed file for this line of code:

Somewhere here the analyzer questioned about proper use of the ternary operator (3 of them), but I have not found enough energy to get what was going on in that code. We have already seen that the developers make such errors, so it could be likely here as well.

Note by a colleague Andrey Karpov. I have been meditating for 10 minutes on this code and I'm inclined to the view that there are no errors. Anyway, it's very painful to read such code, and it's better not to write this way.

I think you can get by without inspecting the contents of macros to make sure that suspiciously duplicated code fragments take place.

V564 The '|' operator is applied to bool type value. You have probably forgotten to include parentheses or intended to use the '||' operator. op.c 11494

This code is very strange. The "iscv | !(kid->op_private & OPpCONST_ENTERED)" expression isn't used anyway. These is clearly some sort of a typo here. For example, it is possible, that this should have been written here:

The RETVAL variable is checked twice in a row. However, it can be seen from the code that this variable is always equal to zero. Perhaps in one or in both conditions a developer wanted to check a pointer RETVALSV, but made a typo.

Explosion of warnings about the sizeof operator

In the analyzer, there are several types of diagnostic rules, which search for bugs related to the sizeof operator usage. In the Perl 5 project, two such diagnostics summarily issued about a thousand of warnings. In this case, macros are to blame, not the analyzer.

In code there many similar macros. I chose one for example, we are interested in the argument "len + 1".

The marco is expanded by the preprocessor in the following way:

The analyzer warning is issued for the construction sizeof(len +1). The fact of the matter is that no calculations in the arguments of the operator sizeof are executed. Various macros are expanded in such code. Probably, it is the old legacy code, where nobody wants to touch anything, but current developers continue to use old macros, assuming they behave differently.

This code fragment is entirely taken from the preprocessed file, because it is impossible to make sure the problem takes place according to the source code, again because of macros.

The sv pointer is initialized by zero during declaration. The analyzer detected that, in the switch branch corresponding to the value 5, this pointer that has not been initialized before, gets dereferenced. Changing of the sv pointer takes place in the branch with the value 4 but in the end of this block, there is the operator break. Most likely, this place requires additional coding.

In this code fragment, the analyzer has detected a pointer k, which is dereferenced one line before it is checked for validity. This can be either an error, or redundant code.

V595 diagnostic finds many warnings in any project, Perl 5 is no exception. There is no way to pack everything in the single article, so we shall confine ourselves with one example, but developers, if they wish, will check the project themselves.

V779 Unreachable code detected. It is possible that an error is present. universal.c 457

In the line XSRETURN_EMPTY, the analyzer has detected unreachable code. In this function, there are two return operators, and croak_xs_usage, which is a macro that expands into a noreturn function:

In such places of the Perl 5 code, the macro NOT_REACHED is used to specify the unreachable branch.

The analyzer has detected a suspicious operation in code which works with bit masks. A variable of a lower size than the hold variable is used as a bitmask. This results in the loss of higher bits. Developers should pay attention to this code. 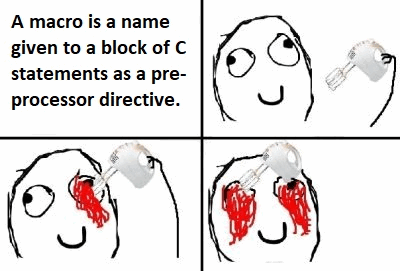 Finding errors through macros was very difficult. Viewing of the report took a lot of time and effort. Nevertheless, the article included very interesting cases related to real errors. The analyzer report is quite large, there are definitely much more exciting things. However, I cannot view it further :). I recommend developers checking the project themselves, and eliminating defects that they will be able to find.

P.S. We surely want to support this exciting project and we are ready to provide developers with a license for a few months.