Nowadays there is no need to implement the physics of objects from scratch for game development because there are a lot of libraries for this purpose. Bullet was actively used in many AAA games, virtual reality projects, various simulations and machine learning. And it is still used, being, for example, one of the Red Dead Redemption and Red Dead Redemption 2 engines. So why not check the Bullet with PVS-Studio to see what errors static analysis can detect in such a large-scale physics simulation project. 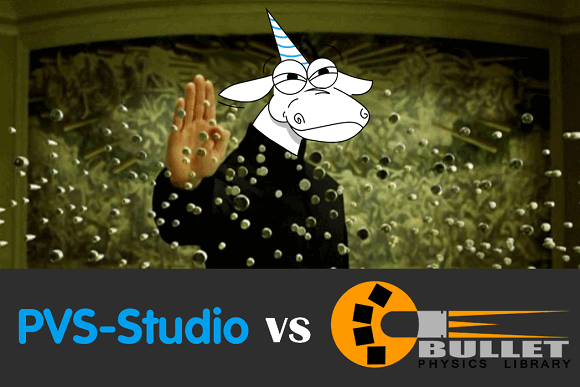 This library is freely distributed, so everyone can use it in their own projects if they wish. In addition to Red Dead Redemption, this physics engine is also used in the film industry to create special effects. For example, it was used in the shooting of Guy Ritchie's "Sherlock Holmes" to calculate collisions.

If this is the first time you meet an article where PVS-Studio checks projects, I will make a small digression. PVS-Studio is a static code analyzer that helps you find errors, defects and potential vulnerabilities in the source code of C, C++, C#, Java programs. Static analysis is a kind of automated code review process.

Let's start with a funny mistake: 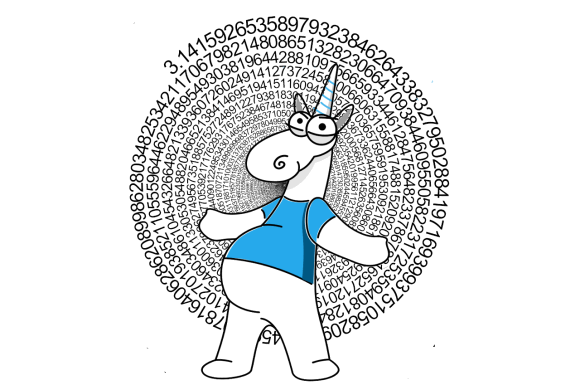 Perhaps, an error in the ten millionth fraction after the decimal point will not lead to any significant consequences, but still you should use the already existing library constants which have no typos. There is an M_PI constant for the Pi number from the math.h header.

Sometimes the analyzer allows you to find the error indirectly. For example, three related arguments halfExtentsX, halfExtentsY, halfExtentsZ are passed into the function here but the latter is not used anywhere in the function. You may notice that the halfExtentsY variable is used twice when calling the addVertex method. So maybe it is a copypaste error and the forgotten argument should be used here.

V751 Parameter 'halfExtentsZ' is not used inside function body. TinyRenderer.cpp 375

The analyzer has also detected the following interesting fragment and I will show it first in the initial form.

It is very strange that the programmer decided to write such a long condition into one line. But it is not surprising that an error has most likely slipped into it.

The analyzer generated the following warnings on this line.

If we write it all down in a clear "tabular" form, we can see that all the same checks apply to Column1. The last two comparisons show that there are Column1 and Column2. Most likely, the third and fourth comparisons should have checked the value of Column2.

In this form, the same comparisons become much more noticeable.

Error of the same kind:

V501 There are identical sub-expressions 'cs.m_fJacCoeffInv[0] == 0' to the left and to the right of the '&&' operator. b3CpuRigidBodyPipeline.cpp 169

In this case, one and the same array element is checked twice. Most likely, the condition must have looked like this: cs.m_fJacCoeffInv[0] == 0 && cs.m_fJacCoeffInv[1] == 0. This is a classic example of a copy-paste error.

It was also discovered that there was such a defect:

The function enet_host_service, the result of which is assigned to serviceResult, returns 1 in case of successful completion and -1 in case of failure. Most likely, the else if branch should have reacted to the negative value of serviceResult, but the check condition was duplicated. Probably it is also a copy-paste error.

There is a similar warning of the analyzer, but there is no point in looking at it more closely in this article.

Over the top: exceeding array boundaries

One of the unpleasant errors to search for is the array overrun. This error often occurs because of a complex indexing in a loop.

Here, in the loop condition, the dofIndex variable''s upper limit is 128 and dof''s is 4 inclusive. But m_desiredState also contains only 128 items. As a result, the [dofIndex+dof] index may cause an array overrun.

A similar error but now it is caused by summing up not when indexing an array but in a condition. If the file has a name with maximal length, the terminal zero will be written outside the array (Off-by-one Error). Of course, the len variable will be equal to MAX_FILENAME_LENGTH only in exceptional cases, but it doesn't eliminate the error but simply makes it rare.

Measure it once, cut it seven times

In cases when you need to use the result of some function's work many times or use a variable which requires to pass through the whole chain of calls to get access to , you should use temporary variables for optimization and better code readability. The analyzer has found more than 100 places in the code where you can make such a correction.

The same call chain is used many times here and can be replaced with a single pointer.

V810 Decreased performance. The 'btCos(euler_out.pitch)' function was called several times with identical arguments. The result should possibly be saved to a temporary variable, which then could be used while calling the 'btAtan2' function. btMatrix3x3.h 576

V810 Decreased performance. The 'btCos(euler_out2.pitch)' function was called several times with identical arguments. The result should possibly be saved to a temporary variable, which then could be used while calling the 'btAtan2' function. btMatrix3x3.h 578

In this case, you can create two variables and save the values returned by the btCos function for euler_out.pitch and euler_out2.pitch into them instead of calling the function four times for each argument.

A lot of errors of the following kind were detected in the project:

V773 Visibility scope of the 'importer' pointer was exited without releasing the memory. A memory leak is possible. SerializeSetup.cpp 94

Memory has not been released from the importer pointer here. This may result in a memory leak. And for the physical engine it may be a bad trend. To avoid a leak, it is enough to add delete importer after the variable becomes unnecessary. But, of course, it is better to use smart pointers.

C++ lives by its own code

The next error appears in the code because C++ rules do not always coincide with mathematical rules or "common sense". Will you notice where this small code fragment contains an error?

The analyzer generates the following warning:

Beautiful mistake! And, fortunately, quite rare. So far, we have only met it in two open source projects, and it is interesting that all of them were game engines.

When working with strings, it is often better to use the features provided by the string class. So, for the next two cases it is better to replace strlen(MyStr.c_str()) and val = "" with MyStr.length() and val.clear(), respectively.

There were other warnings, but I think we can stop here. As you see, static code analysis can detect a wide range of various errors.

It is interesting to read about one-time project checks, but it is not the proper way to use static code analyzers. And we will speak about it below.

Errors found before us

It was interesting to try to find bugs or defects which have already been fixed but which a static analyzer could detect in the light of the recent article "Errors which are not found by static code analysis because it is not being used".

There were not many pull requests in the repository and many of them are related to the internal logic of the engine. But there were also errors that the analyzer could detect.

The comment for the request says that you needed to check the array for the fact that it was not empty, but instead a meaningless pointer check was performed, which always returned true. This is what PVS-Studio's warning about the original check tells you:

V600 Consider inspecting the condition. The 'info.m_deviceExtensions' pointer is always not equal to NULL. b3OpenCLUtils.cpp 551

Can you find out what the problem is with the next function?

The analyzer generates the following warnings:

Repeated assignments in this form of recording are difficult to track with the naked eye and, as a result, some of the matrix elements did not get the initial value. This error was corrected by the tabular form of assignment recording:

The following error in one of the conditions of the btSoftBody function::addAeroForceToNode() led to an evident bug. According to the comment in the pull request, the forces were applied to the objects from the wrong side.

PVS-Studio could also find this error and generate the following warning:

Instead of equivalence of an object's property to one of the enumerators, the V_TwoSided enumerator itself was checked.

It's clear that I didn't look at all the pull-requests, because that wasn't the point. I just wanted to show you that regular use of a static code analyzer can detect errors at the very early stage. This is the right way to use static code analysis. Static analysis must be built into the DevOps process and be the primary bug filter. All this is well described in the article "Introduce Static Analysis in the Process, Don't Just Search for Bugs with It". 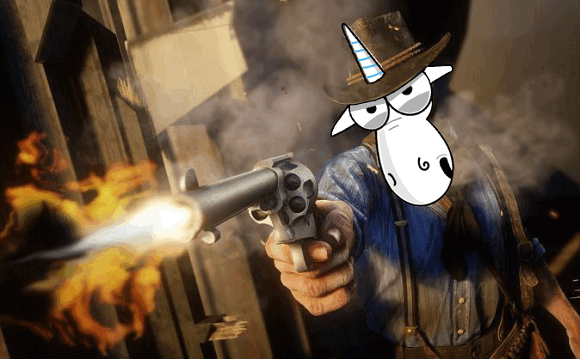 Judging by some pull-requests, a project is sometimes checked through various code analysis tools but corrections are made not gradually but in groups and with large intervals. In some requests, the comment indicates that the changes were made only to suppress warnings. This approach to using analysis significantly reduces its usefulness because it is the regular checks of the project that allow you to correct errors right away rather than waiting for any explicit bugs to appear.