Static code analysis is a methodology of detecting errors in program code relying on studying the code fragments marked by the static analyzer by the programmer. The marked code fragments are most likely to contain errors of some particular kind.

In other words, a static analysis tool detects those places in the program text which are subject to errors or have bad formatting. Such code fragments are left for the programmer to study them and decide if they must be modified.

Static analyzers may be general-purpose (for example, Microsoft PREFast, Gimpel Software PC-lint, Parasoft C++test) and special-purpose to search for some particular error classes (for example, Chord to verify concurrent Java programs). Usually static analysis tools are rather expensive and require that you know how to use them. They often provide rather flexible yet complicated subsystems of settings and false alarm suppression. Because of this static analyzers are used, as a rule, in companies providing a mature level of software development processes. In exchange for being complicated to use static code analyzers allow programmers to detect a lot of errors at the early stages of program code development. The practice of using static analysis also disciplines programmers and helps managers control young employees.

The main advantage of static code analyzers is an opportunity to greatly reduce the costs of eliminating defects in a program. The earlier an error is detected, the less expensive it is to correct it. Thus, according to the book "Code Complete" by McConnell, correction of an error at the stage of testing the code is five times more expensive than at the stage of designing the code (coding):

Figure 1 - Average costs of correcting defects depending upon the time of their appearance in the code and their detection (the data presented in the table are taken from the book 'Code Complete' by S. McConnell)

Static analysis tools reduce the cost of development of the whole project by detecting many errors at the stage of designing the code.

Let us point out the advantages of static code analysis that make this method the most appropriate to detect errors in 64-bit code: 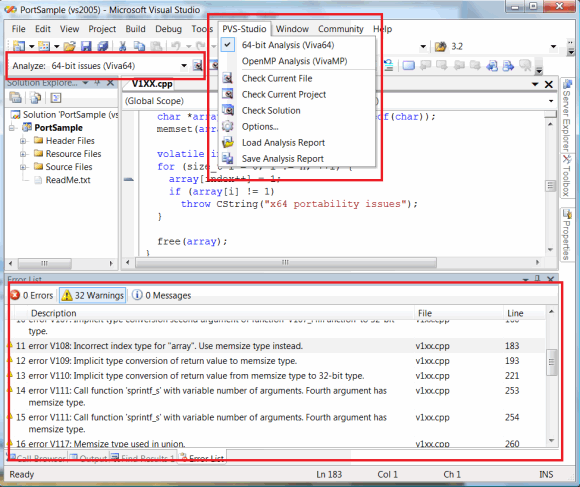 The analyzer's system requirements coincide with those of Microsoft Visual Studio:

All the errors that can be diagnosed are thoroughly described in Help system that becomes available after you install PVS-Studio. You may also see Help system on PVS-Studio online on our site.

The PVS-Studio distribution kit also contains special projects serving as examples of code flaws that will help you study the analyzer.

At present, PVS-Studio analyzer provides the fullest diagnosis of 64-bit errors. You may study the comparison characteristics in the article "Comparing PVS-Studio with other code analyzers".

While studying various patterns of errors in the next lessons, we will often refer to PVS-Studio to show you how to detect them.