It is easy to make a mistake in code that works with separate bits. The pattern of 64-bit errors under consideration relates to shift operations. Here is an example of code:

This code works well on a 32-bit architecture and allows you to set a bit with numbers from 0 to 31 into one. After porting the program to a 64-bit platform you need to set bits from 0 to 63. But this code will never set the bits with the numbers 32-63. Note that the numerical literal "1" has int type and causes an overflow when a shift in 32 positions occurs as shown in Figure 1. As a result, we will get 0 (Figure 1-B) or 1 (Figure 1-C) depending on the compiler implementation. 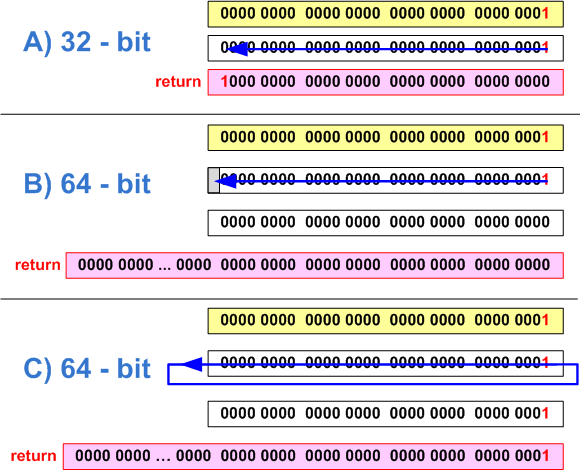 To correct the code we must make the type of the constant "1" the same as that of mask variable:

You should remember and take into consideration the effects of shifting values of different types. To better understand all said above, consider some interesting expressions with shifts in a 64-bit system shown in Table 1.

The type of errors we have described is considered dangerous not only from the viewpoint of program operation correctness but from the viewpoint of security as well. Potentially, by manipulating with the input data of such incorrect functions one can get inadmissible rights when, for example, dealing with processing of access permissions' masks defined by separate bits. Questions related to exploiting errors in 64-bit code for application cracking and compromise are described in the article "Safety of 64-bit code".

In the 32-bit environment, the order of calculating the expression will be as shown in Figure 3. 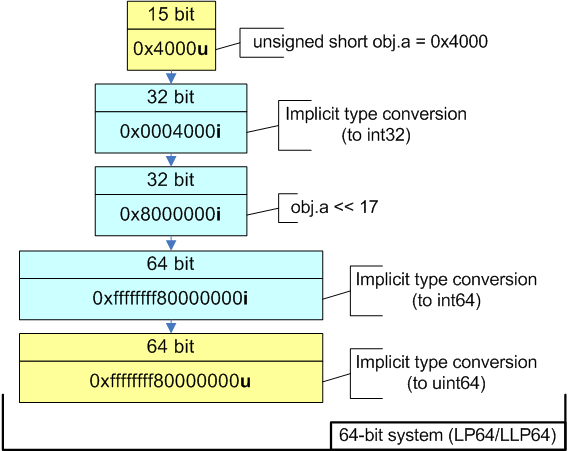 Note that a sign extension of "unsigned short" type to "signed int" takes place when calculating "obj.a << 17". To make it clear, consider the following code:

Now let us see the consequence of the sign extension in a 64-bit code. The sequence of calculating the expression is shown in Figure 4.

Be careful when working with bit fields. To avoid the situation described in our example we need only to explicitly convert "obj.a" to size_t type.

Potentially unsafe shifts are detected by PVS-Studio static analyzer when it detects an implicit extension of a 32-bit type to memsize type. The analyzer will warn you about the unsafe construct with the diagnostic warning V101. The shift operation is not suspicious by itself. But the analyzer detects an implicit extension of int type to memsize type when it is assigned to a variable, and informs the programmer about it to check the code fragment that may contain an error. Correspondingly, when there is no extension, the analyzer considers the code safe. For example: "int mask = 1 << bitNum;".