WinRT (Windows Runtime) is a collective name for a set of basic functions which serve as a basis for the Metro applications development in Windows 8. WinRT is a COM-based API; and due to its COM-like basis, it allows interacting from multiple programming languages such as C++, JavaScript, C# and VB.NET.

WinRT is a new Windows API, a kind of an analog of the good old Win32 API. To create a rich Metro-style user interface, HTML/CSS is used in case of JavaScript and XAML in case of C++, C# and VB.NET. WinRT is used to interact with the Windows kernel, and you can easily call it from different programming languages. Each language takes WinRT API functions as native ones, for WinRT provides a corresponding library version for each of them. Figure 1 shows the place of Windows Runtime in the architecture of the Windows 8 platform. 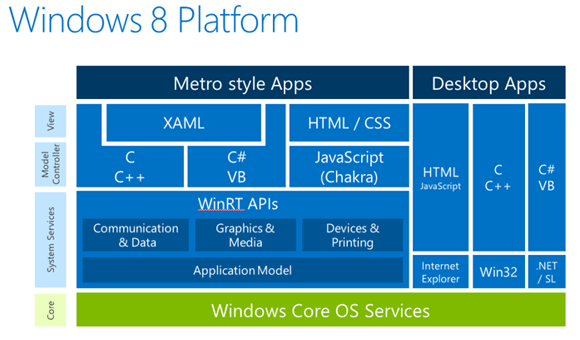 WinRT allows you to: