This code uses a base class "Base" and a class derived from it, "Derived". Each object of these classes occupies 48 and 64 bytes respectively (due to class alignment on an 8-byte boundary; the compiler used is MSVC, 64-bit). When "i >= 1", the pointer has to be offset by "i * 64" bytes each time when accessing an element with a nonzero index, but since the array is accessed through a pointer to the "Base" base class, the offset will actually be "i * 48" bytes.

This is how the pointer's offset was meant to be computed: 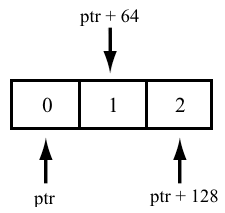 This is how it is actually computed: 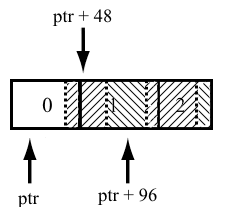 This is the fixed code:

To ensure that an array of derived-class objects is properly stored in a polymorphic way, the objects have to be arranged as shown below:

This is what the correct version of this code should look like:

If you want to emphasize that you are going to handle one object only, use the following code:

This code is considered safe by the analyzer and does not trigger a warning.

It is also considered a valid practice to use such a pointer to access an array consisting of a single object of the derived class.

Note. If the base and derived classes are of the same size, it is valid to access an array of derived-class objects though a pointer to the base class. However, this practice is still not recommended for use.

This diagnostic is classified as: